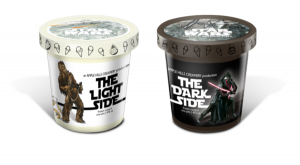 The pints will be sold only at AmpleHills.com, for $36 per four-pack (plus one- or two-day shipping) and can be delivered anywhere in the U.S.

THE LIGHT SIDE flavor is a bright marshmallow ice cream with homemade crispie clusters, as well as a smattering of handmade cocoa crispies (to represent the dark side still lurking within the light).

THE DARK SIDE, by contrast, is an ultra-dark chocolate ice cream with espresso fudge brownies, cocoa crispies, and white chocolate pearls (to represent the light still hiding in the dark, waiting to burst through).

Ample Hills Creamery co-owner and ice cream maker Brian Smith says: “As a sci-fi writer in my past professional life, and a longtime Star Wars fan”—(“Star Wars super fan,” clarifies Jackie Cuscuna, co-owner of Ample Hills and Smith’s wife)—“this is a dream collaboration. And to be able to work with Lucasfilm and Disney Consumer Products to create new ice cream flavors that represent the two sides of The Force…that might just be the coolest thing we’ve ever done.”

STAR WARS and related properties are trademarks and/or copyrights, in the United States and other countries, of Lucasfilm Ltd. And/or its affiliates © & TM Lucasfilm Ltd.