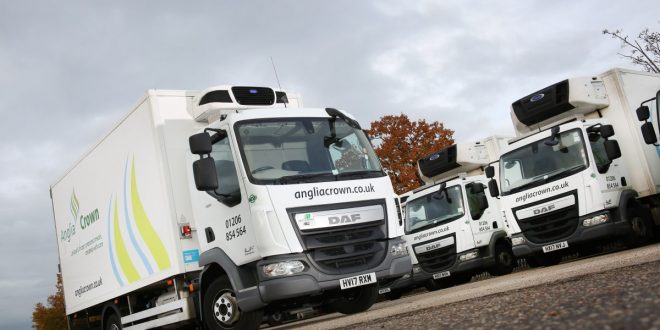 Warrington, England, December, 2017 — For the first time, Carrier Transicold’s Pulsor® 600 multi-temperature (MT) refrigeration system has been mounted to a 7.5-tonne truck. A specially-modified mount kit was created to accommodate the refrigeration system, prior to entering service with Anglia Crown, one of the UK’s largest suppliers of chilled and frozen meals to the healthcare sector. Carrier Transicold, which operates in the UK as Carrier Transicold (UK) Limited, is a part of UTC Climate, Controls & Security, a unit of United Technologies Corp. (NYSE: UTX).

“We wanted a reliable, lightweight unit to maximise payload capacity on the new vehicle,” said Paul Robinson, distribution manager, Anglia Crown. “We’ve specified Pulsor systems from Carrier Transicold before, so it was our first choice for this application, despite having never been mounted to this type of truck before. Happily, a solution was found that achieved exactly what we wanted.”

“We believed that finding a way to mount the Pulsor unit to this truck type would be extremely beneficial, so we made it happen,” said Pat Skelly, managing director, Petit Forestier UK and Ireland. “Anglia Crown’s request was obviously the catalyst but now we’re in a position, alongside Carrier Transicold, to specify the Pulsor for these trucks moving forward, which is great news for the industry.”

The DAF LF is a new addition to Anglia Crown’s 17-strong mixed commercial vehicle fleet – which is 100 per cent Carrier Transicold-cooled. Anglia Crown delivers chilled and frozen meals to more than 100 hospitals across the UK. The new vehicle will primarily operate between the company’s Colchester base and north to Derby and is expected to clock up to 120,000 kilometres per year.

The Pulsor 600 MT offers quick pull-down times across multiple compartments, with Carrier Transicold’s patented E-Drive all-electric technology transforming the truck’s engine power into electricity that provides consistent multi-temperature capacity at any engine speed – providing peace of mind that the unit will maintain the set point even when the engine is idling in heavy traffic.

“Carrier Transicold’s products always do exactly what we need them to,” adds Robinson. “They’re incredibly reliable, but if we ever do have any issues, their support network is second to none. Our closest network service partner is literally just around the corner from us and they are fantastic at sorting any issues, with minimal fuss. The aftersales support from Carrier Transicold is always top notch.”