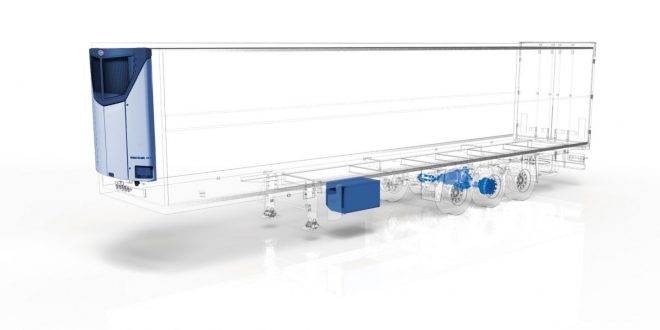 “We believe the Vector eCool represents the future of refrigerated trailer technology,” said Victor Calvo, president, Carrier Transicold International Truck & Trailer. “It’s one of the most exciting new products we have ever brought to market. The launch follows years of research and development, including extensive real-world testing with prototypes operating in customer fleets.”

Suitable for operation with the engineless versions of Carrier Transicold’s Vector HE 19 and Vector 1550 E, the Vector eCool combines the company’s E-Drive™ all-electric technology with a new cutting-edge energy recovery and storage system. This converts kinetic energy generated by the trailer into electricity, which is then stored in a battery pack to power the refrigeration unit. This loop creates a fully autonomous system that produces no direct carbon dioxide (CO2) or particulate emissions.

When the refrigeration unit is operating on battery power, Carrier Transicold’s energy management system will automatically switch on when the charge reaches a certain level and condition, initiating the generator to recharge the battery to ensure full refrigeration capacity.

The eCool system can also be plugged into the electrical grid when the trailer is parked and will fully charge in under four hours. On the road, the battery pack is recharged using power generated by the axles and the kinetic energy created under braking.

When used with Carrier Transicold’s flagship Vector HE 19 unit, the Vector eCool can provide even further reductions in energy consumption*. Even with the system’s axle generator and battery pack fitted, it is still significantly lighter than a standard diesel unit with a full tank of fuel.

The Vector eCool is also PIEK-compliant, meaning when used with the City versions of the Vector HE 19 and Vector 1550 E, operating noise is below 60 dB(A). Combined with its emissions performance, the Vector eCool provides the ultimate solution to ever-tightening inner-city and urban regulations.