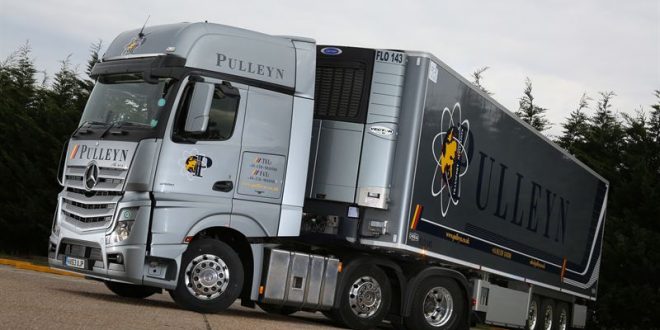 A long-standing Carrier Transicold customer, Pulleyn Transport provides specialised temperature controlled services throughout the UK, continental Europe and beyond. The 16 new Vector 1950 MT units will be mounted to new 13.6 metre Chereau trailers and join a commercial fleet of 45 trucks that range from 7.5 tonne rigid trucks to 44 tonne artics.

With a refrigeration capacity of 18,875 watts, the Vector 1950 MT system’s multi-zone control allows for a flexible trailer configuration, whilst the 5,700 m3/h airflow helps protect the cargo with unparalleled pull-down speeds and even air distribution. This makes them ideal for transporting sensitive goods for Pulleyn Transport as the company carries a variety of cargo, including food, pharmaceutical and healthcare products, as well as fragile orchestral equipment, fine arts.

“The Vector 1950 units’ high performance was a huge factor in our decision to place this order, due to the extremely sensitive loads we transport,” said Ryan Pulleyn, managing director, Pulleyn Transport. “We also consistently return to Carrier Transicold thanks to the reliability and aftercare service we receive, especially from the service engineers.”

The reliability of the Vector 1950 MT system is underlined by the fact that Pulleyn Transport has moved away from the dual-refrigeration systems it operated historically. Now, with just a single Vector 1950 MT unit on each of the 16 new trailers, the company benefits from an increase in fuel efficiency and payload capacity – replacing a previously requirement to install an undermount refrigeration unit on trailers as a back-up. In addition, because of Carrier Transicold’s patented E-Drive™ all-electric technology, the Vector 1950 MT units also aid in reducing carbon dioxide emissions by reducing refrigerant leaks by up to 55 per cent, when compared to conventional systems.

“The everCOLD package is yet another example of why we always opt for Carrier Transicold. The service and reliability is so good we will happily operate these new trailers for the next nine years, which is longer than ever before,” adds Pulleyn.