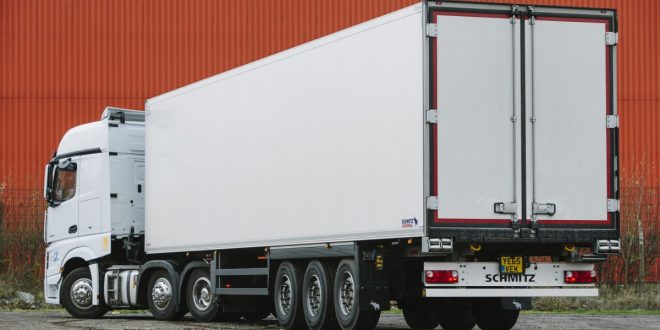 October 2017 – The market leader, Schmitz Cargobull, continues to expand its position in both Europe and worldwide: “We produced 57,982 trailers, a good 10,000 more than planned,” reports Chief Executive Officer, Andreas Schmitz, when presenting the figures for the 2016/2017 business year. “Turnover exceeded the €2 billion mark and the orders received during the business year actually exceeded 61,000 units,” adds Andreas Busacker, Chief Financial Officer of Schmitz Cargobull AG. He regards the consistent focus on customers, highly-skilled employees and technological leadership as success factors for the family-owned company that recently celebrated its 125th anniversary.

The company brought major investments for the future to fruition during the business year with the conversion of the Berlin plant into a production facility for the new Van Bodies vehicle class (3.5 to 6 tonnes) and the establishment of a Multi Production Plant (MPP) in Turkey. “We invested €48.1 million in tangible assets,” states Busacker. During the reporting period (1 April 2016 to 31 March 2017), turnover increased by more than 14% to €2.026 billion (previous year: €1.779 billion). The earnings before tax reached a total of approximately €104 million. As such, the profit before tax climbed to 5%. The equity quota remained stable despite growth at around 54%.

All signs continue to point to growth in the traditional trailer market with curtainsiders and box body trailers. Curtainsider production showed especially strong development. The production output of the S.CS curtainsider semi-trailers grew by more than 15% to almost 31,700 units (previous year: approximately 27,400 units). The production increase for the S.KO box semi-trailers was approximately 15% for the second year in succession. As a result, approximately 19,000 new units were ready to be picked up in the past business year, compared with 16,500 in the previous year. With an approximately 12% increase from more than 3,400 units to more than 3,800 units the S.KI tipper trailer product range returned to growth after restructuring measures. In-house axle production at the Altenberge plant reached a record level in the business year with more than 156,000 produced units. In total, the number of produced axles exceeded one million units.

The entry into the van bodies segment with the V.KO rounds out Schmitz Cargobull’s product portfolio for lighter vehicles. The V.KO will be available in standardised sizes, enabling optimum adaptation to the vehicle manufacturers’ specifications. The new production line in Berlin is currently designed for an annual production of 7,500 van box kits. With the new product line that is in especially great demand as a result of growing online retail trade, Schmitz Cargobull rounds out its range of high quality and sustainable transport units to include the “last mile”.

Thanks to high production figures, the number of employees also rose by 375.

At the end of the business year almost 5,800 people were employed at Schmitz Cargobull, a fifth of whom were temporary employees. This flexible workforce is required in the cyclically fluctuating trailer market to compensate for fluctuations of up to 35%.

The major increase in material costs was cause for concern during the current 2017/2018 business year. Nevertheless, the Board of Management expects stable and strong demand. “In the 125th year of our existence we want to beat our previous sales record of almost €2.2 billion, which was set in 2007/2008,” announces Chairman of the Board, Andreas Schmitz.