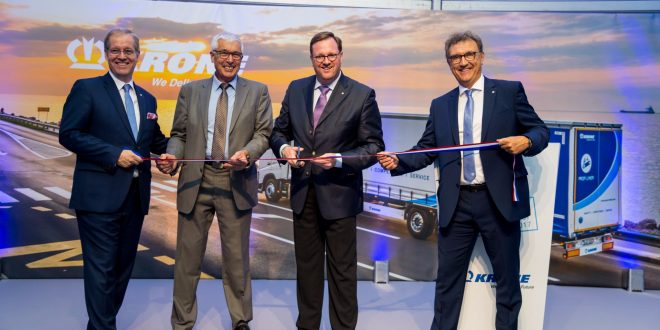 October 2017 – Together with approximately 250 guests from the French logistics industry, the Krone France Team opened the new Krone Center in Lyon, near the Saint Exupéry Airport (a 5 min. drive). In his welcome address, Bernard Krone emphasised: “We consistently pursue our strategy of being close to the customer. As a professional trailer manufacturer, we are a service provider involved with all aspects of the vehicle and offer complete service packages.”

Likewise, host Philippe Lamberet emphasises that all areas of expertise are housed under one roof in the Krone Center: In addition to new and used vehicle sales, classic service, financing and fleet services will also be available at the Lyon Pusignan site. The Krone Center provides local final assembly, maintains a spare parts warehouse, and a service workshop.

Krone France annually sells approx. 2,000 new vehicles and approx. 280 used vehicles via Krone Used Just under 50 units are leased in France via Krone Fleet. 25 employees are now based at the new KRONE Center in Pusignan/Lyon, including the Krone Fleet Team.