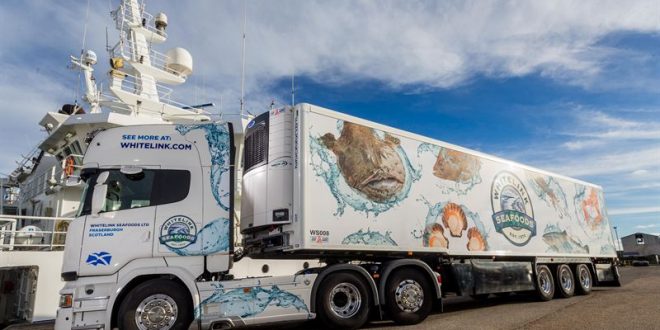 The new trailer will be used to deliver fresh and frozen seafood throughout the UK and Europe. (Photo: Carrier)

Whitelink Seafoods, a UK seafood processor, has updated its fleet with a fuel-efficient Carrier Transicold Vector™ 1550 temperature-controlled system, mounted to a new Gray & Adams reefer trailer. Carrier Transicold, which operates in the UK as Carrier Transicold (UK) Limited, is a part of UTC Climate, Controls & Security, a unit of United Technologies Corp.

The trailer was built at the Gray & Adams factory in Fraserburgh – just two miles from Whitelink Seafood’s operation on the east coast of Scotland. It will be used to deliver fresh and frozen seafood throughout the UK and Europe, carrying return loads consisting primarily of fruit and vegetables, both fresh and frozen.

“We’ve been specifying Carrier Transicold refrigeration units for 22 years, and we’ve never had any reason to change that,” said Ronald Noble, fleet manager, Whitelink Seafoods. “Reliability is very good and the aftercare service we receive is second to none. The Vector 1550 system offers the perfect blend of performance for our needs, but also helps us to cut operating costs and emissions levels – both of which are very important to our business.”

The Vector 1550’s cooling capacity of 14,995 Watts, with optimised fuel efficiency, is achieved using a patented combination of a hermetic compressor with an economiser, which enables the use of a highly efficient 1.5 litre diesel engine. The economiser supplies up to a 40 per cent increase in refrigeration capacity during pull-down, before automatically reducing during the temperature regulation phase to save fuel.

Whitelink’s long history with Carrier Transicold and the seafood industry sees it supply everything from whole turbot and monkfish cheeks, to frozen squid and graded fresh langoustines to locations across the world. The new Vector 1550 unit is expected to operate within the fleet for the next decade, clocking up around 160,000 kilometres a year per vehicle.